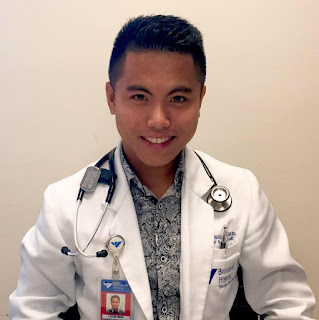 Dr. Louie Mar Gangcuangco is an HIV researcher, best-selling novelist, and one of the youngest licensed physicians from the Philippines. He is the author of the multi-awarded Filipino novel Orosa-Nakpil, Malate and is currently working as a clinical research associate for the Hawaii Center for AIDS.

Dr. Gangcuangco was born on March 26, 1987 in Mandaluyong City, Philippines. He finished his primary education in Montessori de San Juan (MSJ) as the batch valedictorian in 1999. He represented MSJ in several competitions, most notably the Walt Disney Interschool Leadership Competition in which he was second runner-up.
He was a junior reporter for the morning television show, Alas Singko y Medya (ABS-CBN) from 1997 to 2000 where he featured pertinent issues affecting children and interviewed celebrities, including the international pop singer, Aaron Carter. He graduated from Manila Science High School (Masci) in 2003 as the First Honorable Mention, First Meritorious Awardee, Best in English, and Best in Filipino. He has represented Masci in several interschool competitions, including the Philippine National Inventors' Contest; Children’s Museum and Library Incorporated Impromptu Speech Contest (second place); and The Philippine National Police Impromptu Speaking Contest (third place). He was the Science editor of The Nucleus, the school publication of Masci, awarded as the third best school paper in the Philippines during his editorship.

Dr. Gangcuangco was two years accelerated in college under the Integrated Liberal Arts and Medicine (Intarmed) curriculum of the UP College of Medicine at the University of the Philippines Manila. He had his elective clerkship in Infectious Diseases at the David Geffen School of Medicine in UCLA in 2008 where he received an 'A' performance rating. He trained under the Straight Internal Medicine Internship program of the Philippine General Hospital from June 2009 to April 2010. Dr. Gangcuangco received his BS in Basic Medical Sciences degree in 2007 and Doctor of Medicine degree from the UP College of Medicine in May 2010 with the prestigious distinction of being the Most Outstanding Student in Research.

Dr. Gangcuangco's interests in infectious diseases inspired him at 18 years old, to write the novel, Orosa-Nakpil, Malate, which was published in March 2006. It is an anthropologic exposition of the mechanics of HIV transmission in the Philippine's gay district of Malate, Manila.
Orosa-Nakpil is critically acclaimed for promoting HIV and AIDS awareness. It was featured in the top-rating show Sharon (talk show) in June 2006 and was also aired internationally through The Filipino Channel. In August 2006, Dr. Gangcuangco was awarded the Y Idol Award (Youth Idol Award) by Studio 23’s Y Speak. Later that month, the Sentro ng Wikang Filipino conferred a Sertipiko ng Pagpapahalaga for Orosa-Nakpil, Malate. His novel is endorsed by prominent people and institutions including the multi-awarded director, José Javier Reyes, Dr. Jaime Galvez Tan (former Department of Health secretary) and Dr. Raul Destura of the National Institutes of Health Philippines.
Orosa-Nakpil, Malate became a National Book Store Best Seller in April 2007, making Dr. Gangcuangco one of the youngest best-selling authors in the Philippines. With him in the list were Mitchell David "Mitch" Albom of One More Day, James Patterson and Maxine Paetro of The 5th Horseman, and Gabriel Garcia Marquez of Memories of My Melancholy Whores. The book landed on the Top 8 spot, overtaking international authors Steve Berry and Kiran Desai.
Orosa-Nakpil, Malate, has been featured in several publications, including the Generation Pink Magazine’s The Great Escape Issue; The Flame: The Official Liberal Journal of the Humanities of the University of Sto. Tomas; Icon Magazine’s Career Issue; The Manila Collegian, The Nightmare Before Christmas Issue; and The Philippine Star’s My Favorite Book, Sunday Lifestyle.
In 2008, Dr. Gangcuangco published his second book, Gee, My Grades Are Terrific: A Student’s Guide to Academic Excellence, a self-help book for students. The English version of Orosa-Nakpil, Malate was released in September 2009 and the second edition of Gee My Grades Are Terrific was published in August 2011. Dr. Gangcuangco is considered one of the most influential authors of the Philippines, together with other pillars of Philippine literature: Dr. José Rizal, F. Sionil José and Lualhati Bautista.
Dr. Gangcuangco has served as a guest speaker for several universities in the Philippines, including the University of the Philippines Manila, University of the Philippines Diliman, Pamantasan ng Lungsod ng Maynila, San Beda College, Philippine Normal University, and the American Chamber Foundation Philippines. He has delivered lectures on various topics including: homosexuality, HIV-AIDS, and gay literature in the Philippines.

In 2010, Dr. Gangcuangco headed one of the largest HIV testing projects among men having sex with men in Metro Manila. The findings were presented at the XVIII International AIDS Conference in Vienna, Austria[7] and was published at the Southeast Asian Journal of Tropical Medicine and Public Health.[8] The study entitled, "Prevalence and risk factors for HIV infection among men having sex with men in Metro Manila, Philippines," stirred national debate and attracted media attention because of the high HIV infection rate found among the participants.
In December 2011, Dr. Gangcuangco left his positions as faculty member of the San Beda College of Medicine and the Ateneo School of Medicine and Public Health to pursue HIV research fellowship at the Nagasaki Institute of Tropical Medicine. He is currently a clinical research associate at the Hawaii Center for AIDS. His research projects are focused on the cardio-metabolic complications of HIV and aging, neuro-cognitive dysfunction, and inflammation.
Dr. Gangcuangco is an associate member of the Philippine Society for Microbiology and Infectious Diseases, International AIDS Society, and the American College of Physicians.